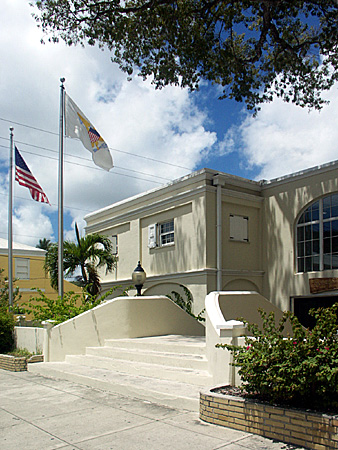 The public library in St. Croix, U.S. Virgin Islands had its beginning in the 1920’s. It was from those years that this institution has evolved as an entity of the Virgin Islands Government under the administration of various departments of the executive branch.

The Florence Augusta Stephens Williams Public Library (FWPL) building was previously the location of the public school for Christiansted.  In the early 70’s the Government decided to build a full-service public library and to relocate from the Customs House on Hospital Street. That sits in one of the most scenic and historic locations in the Caribbean. Although quite functional at the time, it could not meet the demands of an expanding population. 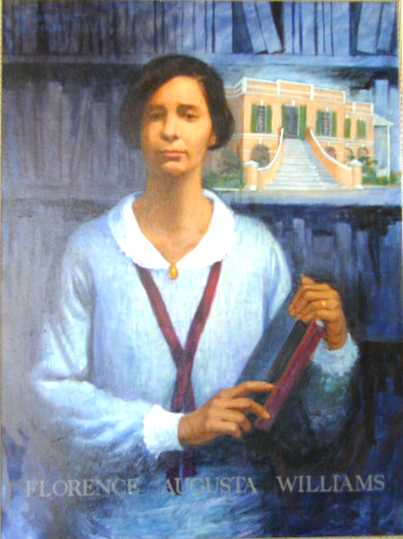 Florence Augusta Stephens Williams, for whom the library was named, was the first native Crucian librarian. The library was dedicated on September 15, 1974. The potrait of Florence Williams by Leo Carty hangs on the wall inside the library. The western wing underwent reconstruction and houses the Children’s Library on the first floor and the Children’s Theater on the second.  The FWPL is a full-service facility with approximately twenty thousand square feet distributed on four floors.  It is modern facility, fully air-conditioned and has over 30,000 volumes.

Located in the heart of the Christiansted historical district, the library is used by people of all walks of life. One can see groups of children in school uniforms making their frequent field trips to the library to get their first library card, check-out books and participate in story hour; bus loads of senior citizens frequent the library at least once per month for their regular group visit.  Visitors from the world over frequent the library, some of them authors themselves who just drop in to see if their title/s is available in the library’s collections.  With luck patrons are treated to an impromptu autograph session.

In addition to the traditional Reader Services, offered also is Historical/Cultural Programming—The library actively produces and facilitates in cooperation with other organizations, historical and cultural programs, numerous successful programs and projects have emanated from the staff, Friends of the Library, patrons, community non-profit organizations and institutions.

One vivid example: In 1985 the library was the focus of the celebration of the 250th of the anniversary of Christiansted.  The Virgin Islands Humanities Council and the National Endowment funded this project.  The range of activities included: streets tours of the town of Christiansted, dramatic skits, historic lectures, “Come Talk Old Times” open discussions and reminiscence of past times in the town; Cariso music, and a culminating birthday party encompassing the entire block with mocko jumbies, school bands, quadrille dancers, local bands, theater dance and other performing arts groups and individuals.

The program received special recognition on the floor of Congress as an exemplary NEH project.  The President of the United States sent a letter of congratulations to the library. Thousands from the community took part in this celebration. Each year during National Library Week the library with support of the FRIENDS conducts daily programs and projects similar in nature. 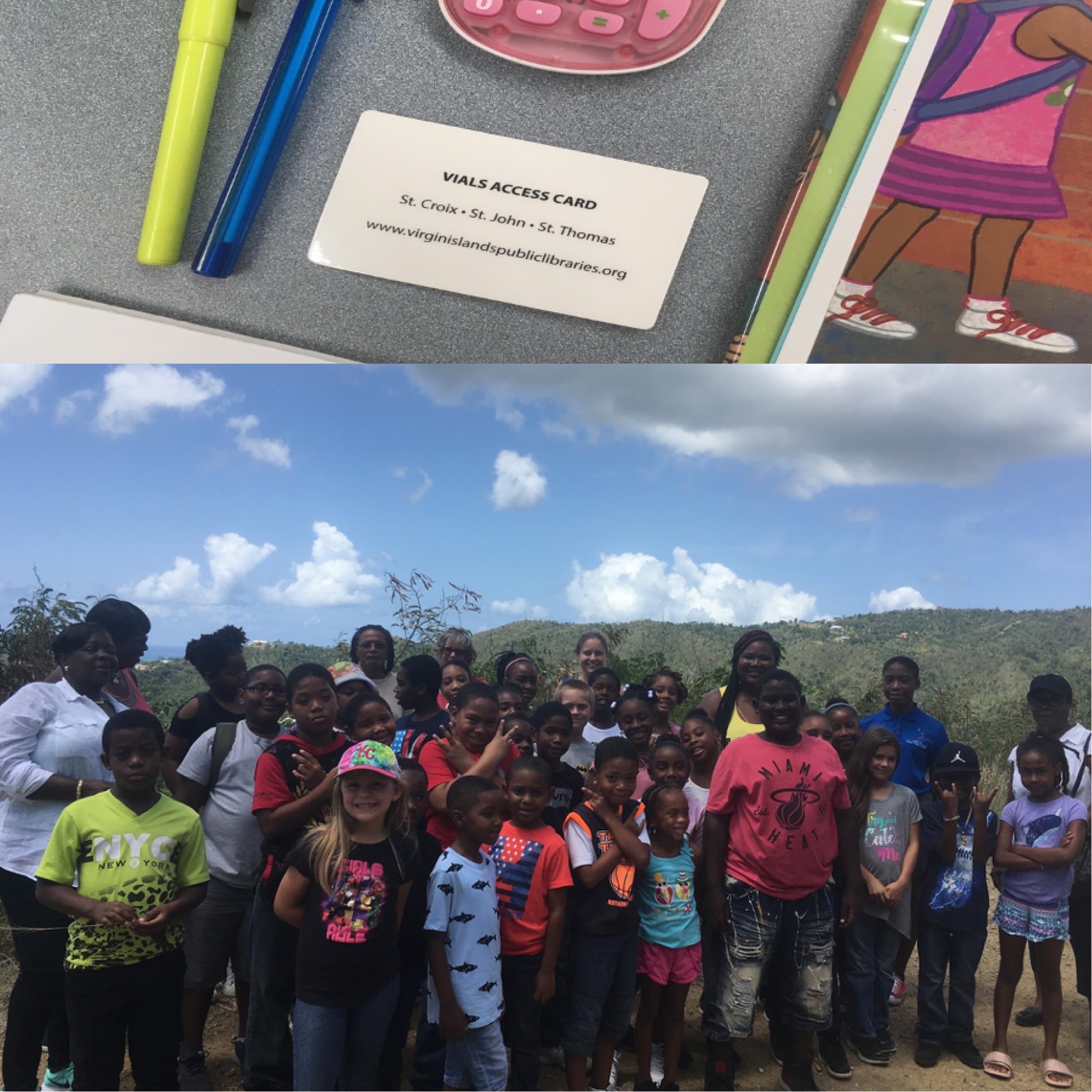 The primary focus of the library is to provide free reader services to adults, children, young adults, senior citizens, residents and non-residents.

Virgin Islands Archives/Records—The library houses original and microfilm collections of V.I. Archives, records, newspapers and other materials; it is capable of reproducing images via microfilming and photocopying. Microfilm reader/printers are available.

viNGN/Public Computer Center—The viNGN Public Computer Centers with high-speed connections provide patrons with free access to the Internet and the World Wide Web.  The Computers, peripherals and contemporary software was funded primarily from a grant by the National Telecommuniations Information Administration (NTIA) as part of the Broadband Technology Opportunity Program (BTOP). 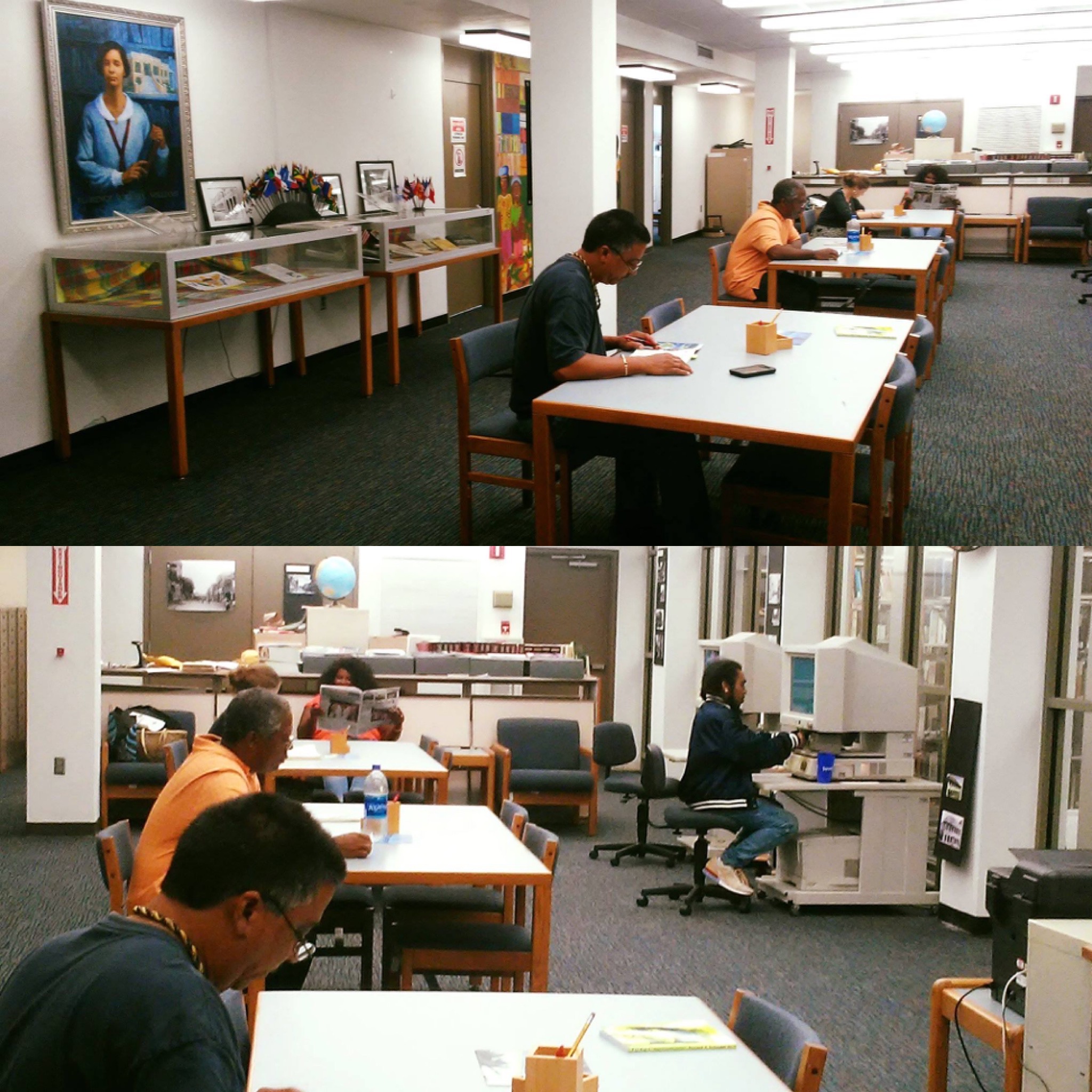 Meeting Room—The Children’s Theater (currently under renovation) is where the library provides meeting room space for community organizations at no charge.  It is here where public hearings on vital projects that affect the life of the people are held.  History will reflect on those decisions and where they were held.  Each year hundreds of people gather here for hearings.

In the 80’s the library served as the headquarters for the Constitutional Convention.  For more than a year delegates gathered for the important business and the painstaking steps in deciding the future of the Virgin Islands.  Two presidents of the American Library Association have presented here; the Delegate to Congress for the Virgin Islands and a member of the House of Representatives for the U.S. for the State of Missouri have presented here as well.  The only librarian in Congress, Congressmen Major Owens  of New York was here for the Governor’s Conference on Libraries and Information Services.  Nobel Prize winner Derrick Walcott visited once when he was part of the same conference.

Over the years the library has hosted exhibits of fine art, indoor and outdoor concerts, movies under the moonlight, poetry reading, debates, news conferences for the Governor, Delegate to Congress and other high officials.  The library currently serves as a Polling Place for the town of Christiansted.  Throughout the building are murals that were produced by children patrons under the tutelage of artist like the late Leo Carty who have become artists and passed the tradition on to successive groups of young artists. Currently there are four murals permanently placed in the building.  The St.Croix Art Exchange has generated numerous paintings and photographs that are now in the library’s permanent collection.  These works were produced by many of the noted artist in the V.I.  During National Library Week the art work of children who participated in a summer art program with Danica Art Studio, has been put on display.  The subject of these works is reading/library related and will be added to the FWPL web site.

Devastation on at least six occasions the library has been devastated by hurricanes and tropical storms.  The most extensive damage to the library occurred in September 1989 when hurricane Hugo hit the island and remained for thirteen hours.  The building was totally destroyed leaving only the walls.  A large percentage of the collections were destroyed or damaged.  It took six years to recover and rebuild the library only to be victimized again by yet another hurricane, this time it was hurricane Marylyn which hit the island in September 1995,five months after the newly repaired building was dedicated.

The Florence Williams Public Library continues to serve the needs of the public with a dedicated staff developing resources. 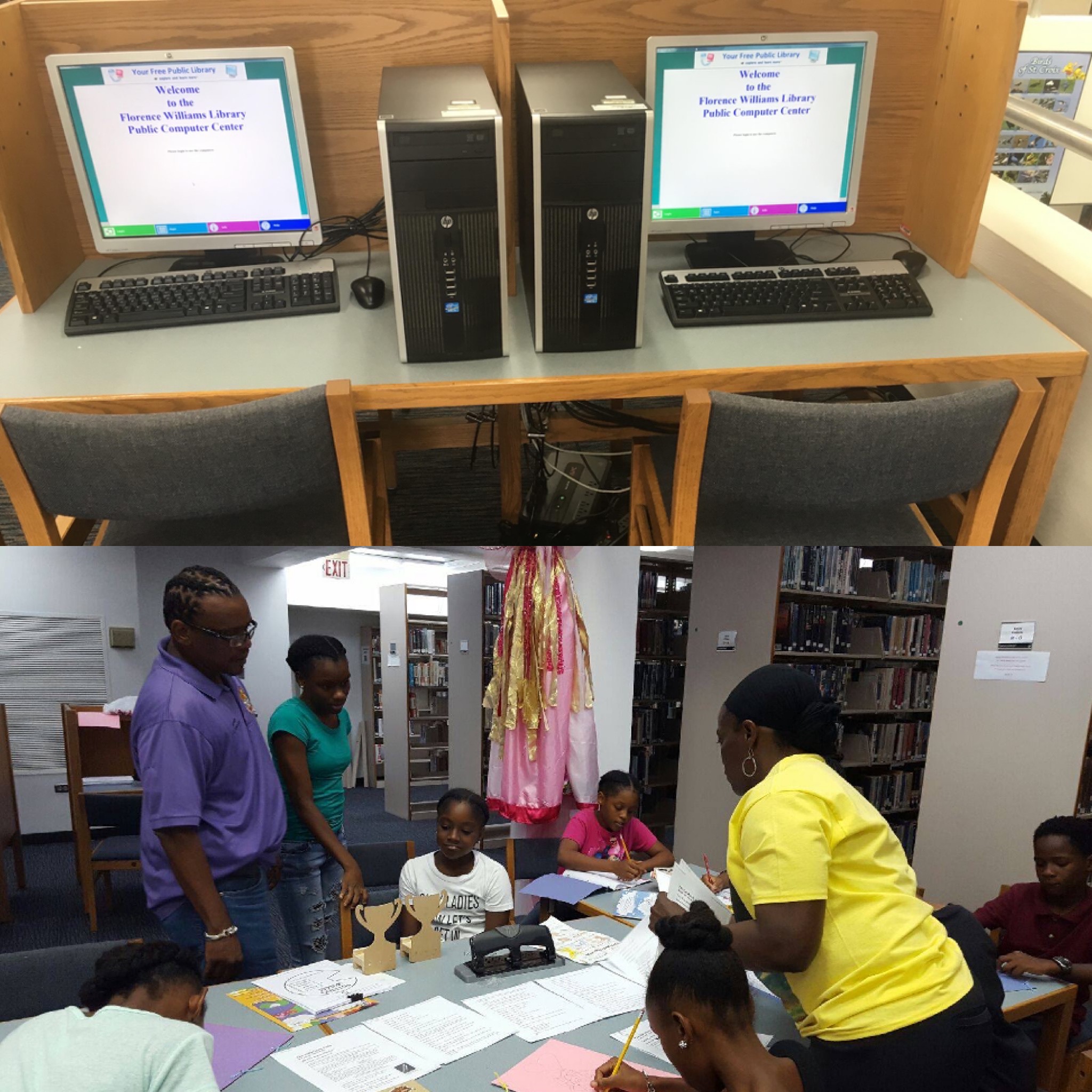 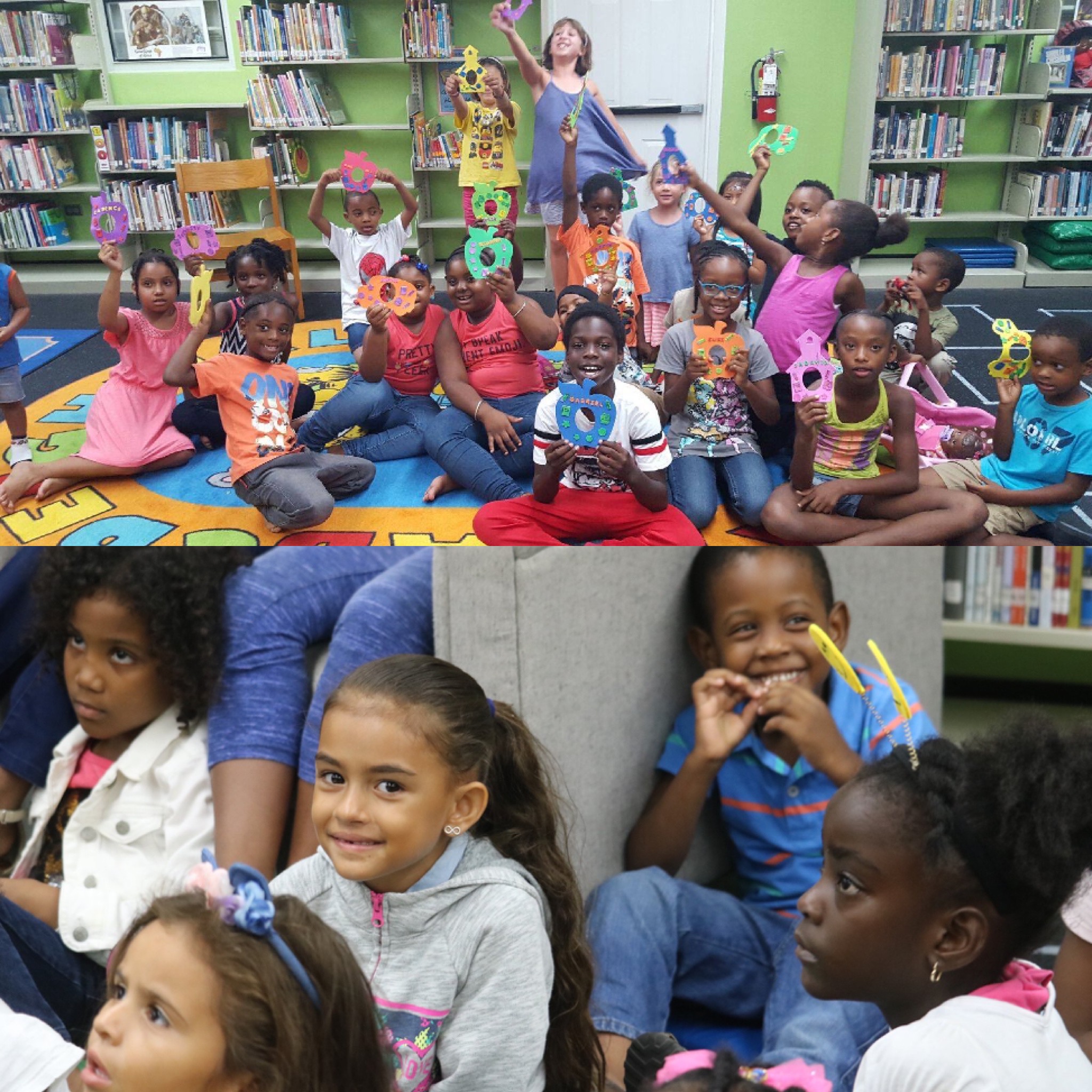